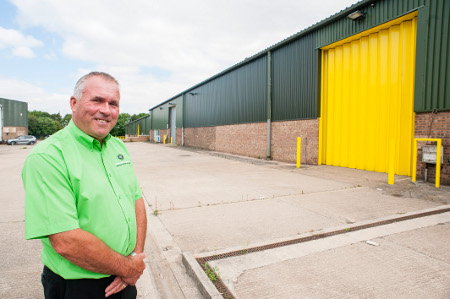 Russell Richardson is tripling the size of its premises to cope with an unprecedented period of growth.

It’s boom time for confidential waste shredding, archiving and recycling experts Russell Richardson, with over 200 tonnes of paper waste now arriving at its Attercliffe headquarters on a weekly basis – more than double that of two years ago.

The company, in its 40th year, is relied on by thousands of SMEs across the country, the head office of the Formula One Grand Prix team, numerous police forces, motor giants and even famous British fashion designers.

The effects of GDPR, and the company’s growth strategy, which has seen over £500,000 of inward investment in new machinery, staff and trucks, has led to business going through the roof, says MD Jonathan Richardson.

“Attercliffe has been a great location for us logistically and when we set up our site here eight years ago we never dreamed we could outgrow it. But work is coming in at such a rate, our 13,000 sq ft warehouse and yard are no longer big enough.”

The whole operation will move to a spacious site in Tinsley previously occupied by national delivery giants Yodel.

The Park House Lane site sits on the Rotherham-Sheffield border and will provide 30,000 sq ft of warehousing, plus offices and a large yard.

A seven-year lease has been signed and Russell Richardson’s 22-strong team is planning a phased relocation over the next four months to avoid operational down-time.

The biggest task will be moving the company’s 14-tonne shredder. The equipment, which can deal with up to 200 tonnes of waste paper and materials a week at the rate of seven tonnes an hour, will travel 2.7 miles

miles by low-loader to its new home.

Bought 18 months ago, the mega-shredder enabled the company to pursue bigger clients.

Said Jonathan Richardson: “The company has recently taken on three new employees and purchased a £30,000 reel splitter and three new collection vehicles, including a mobile shredder and an articulated lorry capable of transporting up to 26 tonnes of waste paper. Now we need a future-proof new home to house us as we grow further in years to come.”

Further plans include taking on a neighbouring property to house the company’s secure document storage service for businesses which launched in 2015 at Waleswood and is now at 80 per cent capacity.