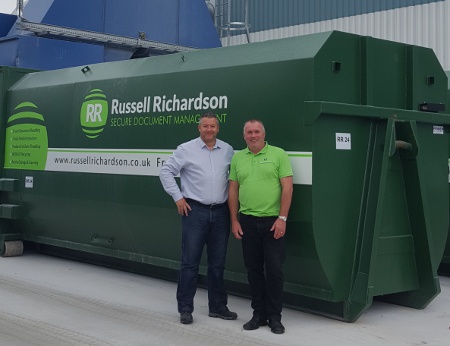 A Sheffield waste specialist has stepped in to keep the UK’s top web-to-print company running smoothly by offloading/recycling a colossal 160 tonnes of its scrap paper.

A Sheffield waste specialist has stepped in to keep the UK’s top web-to-print company running smoothly by offloading/recycling a colossal 160 tonnes of its scrap paper.

Russell Richardson have set on two extra staff at their Attercliffe HQ, home of the biggest paper shredder in the region, and shipped three vast compactor skips to Manvers-based Bluetree Group to with deal with the huge amount of trimmings and offcuts it produces around the clock.

The rapidly expanding print retailer and manufacturer, named in the Sunday Times Virgin Fast Track 100 for the last two years, employs 270 and produces multi-millions of business cards, fliers and other web to print products daily for huge PLCs and SMEs across the UK.

“Everything has to be cut to size, which produces a huge amount of scrap trimmings and cuttings,” said Phil Mott, supply chain manager. “It’s Imperative we have a totally reliable waste collection service.”

“ If those skips aren’t emptied as regularly as clockwork, it could actually halt our production. We would have to load them manually and that would mean taking staff off the floor, a very costly operation,” added Phil Mott.

A family-run firm for 39 years, Russell Richardson’s confidential shredding, archiving and recycling service has a fleet of mobile shredding trucks and collection vehicles on the road daily throughout the UK.

It operates the Sheffield City Region’s only shredding plant, which deals with up to 200 tonnes of waste paper, plus commercially sensitive, branded, counterfeit or faulty products, every week at the rate of seven tonnes an hour.

Said sales manager Nicky Hellewell  “Bluetree is our biggest client to date in terms of tonnage and we are proving we are more than capable.

“We have three compactor skips, each with a 14 tonne capacity, on site and collect on a rotational basis six days a week.”

In line with standard practises in the print industry, Bluetree’s waste is recycled to the paper milling industry and the customer is provided with their cut of the profits, in the form of a rebate.

“Added Nicky: “We won the Bluetree contract on service and reliability, and the competitive rebates we offer. Paper is Bluetree’s No1 commodity and one of their biggest expenses. It’s vital they recoup a healthy contribution from recycling.”

The company, led by MD Jonathan Richardson, is pursuing contracts with other large-scale print companies.

Bluetree started life as a skilled local screen printing business in 1989 from small premises at Magna, Rotherham and is now recognised as the fastest growing print business in the UK.

It won a Guinness World Record in 2015 for printing the world’s largest business card - and last month was named Number 6 on the Yorkshire Business Insider Growth 100 list.